WHAT an afternoon.  What started out as a cheeky afternoon break from work before an evening out has truly turned into a long and ranty blog post, how apt.  I remember, way back when in 2007 and/or 8, reading the Metro on a trip home from town.  In it, was this picture.  Beautiful, sexy young New Yorkers; I think exactly who and what I wanted to be.  Back then I had big dreams of stars and the stage, who knows, they might just return when I graduate.

Tuesday (or was it Wednesday?) evenings at 10pm sharp led to me booking out a sofa in my family home, and perhaps being allowed one glass of wine if I didn’t have a full day of college the next day.  I would look forward to it all week, be ever so excited, for the wonder that is, that was, Gossip Girl.

As with any great love of mine with any television show, it is undoubtedly intermittent.  I began ‘Dexter’ by myself as a frightened 16 year old, and couldn’t finish it until I met boyfriend.  Henry Cavil and his sex scenes suddenly became famous and now ‘The Tudors’ isn’t so appealing.  I’m 1 episode away from the ‘Once Upon a Time’ first season finale, but I’ve got bored.  My love of Gossip Girl nearly died when ITV 2 stopped broadcasting it, and hell hath no fury like a girl who learned Netflix didn’t store the grande finale (but that’s for another post).  But I persevered, and by golly I’m pleased.

Last year, on a wine fuelled evening in my family home, my human equivalent of Carlsberg begrudgingly informed me which of the characters, was indeed Gossip Girl.  It didn’t matter though.  As soon as I knew, it suddenly became obvious.  Yes I perhaps didn’t experience the heart pumping, mind racing finale that so many others did regarding the identity of Gossip Girl, but it did not stop my heart pumping and my mind racing.  There were even tears.

I think it was soon as they mentioned Gatsby, I let go a little.  For me, it was always the Tumblr world and the so-called ‘Skins Lifestyle’.  It was the smoke fuelled parties, the disposable cameras, the wild nights on tables; throughout college I looked to these people and felt sadness, pity, joy and want all at the same time.  But, I grew up, and realised I was one of those people already, and the happiest I’ve ever felt.

Gossip Girl made me think.  Kind of like Harry Potter, I’ve followed age suit of the characters, experienced some of their experiences and felt some of their feelings.  So it means more than a 5 year old quoting ‘Expelliamus’ or my 40 year old sister drooling over Dan Humphrey.  No, I am part of the Gossip Girl generation.  Of smart phones, and blogging and websites, and want and lust and craving.

But, like Dan, I’ve learnt to rise above.  To be grateful for what you have.  And as I’ve got older, and somehow weirdly wiser, I’ve got happier.  And right now, I’ve never been so happy.  Gossip Girl has just helped cement that in my heart.

The Human Equivalent of Carlsberg = https://bellasbits.wordpress.com/2010/06/14/human-equivalent-of-carlsberg/

It’s currently 8.38am.  So far today I have had two mugs of coffee, washed up and have done a load of laundry.  Now I’m sitting watching Lorraine contemplating my day, and it’s not even 9am.

On Monday, I started my Masters course at University and Boyfriend started a new job.  We are well and truly in the swing of September Syndrome.  Granted, we’re a few weeks behind everyone else.  All the children ran back to school the first few days of September, us Uni students are just catching up.  But nevertheless, the stationary shops continue to plug ‘Back to College’ gear, everyone decides they need new commuting shoes and a new bag is just, well, essential.  I also find September the time of year where people, young or old, assess changes in their lives.  Maybe it’s the combination of coming home from a summer holiday, the evenings getting drastically shorter and the need to find your scarf but something changes and people become more ambitious, driven and contemplative about the future.  I know friends who are years from education who use September as a time to address that diet, consider that savings plan or change their hair.  I don’t know why it is, or what it is, but with the going back to education season, people seem to want to become brighter, want to become better.  Myself included.  It’s almost a mid-year revolution feeling if you like.

Are you suffering from September Syndrome?  Don’t feel bad, it’s a good thing!  Perhaps you’ll fall in love with life..?  I dare you.

After a little break, blogging about other things and the like, I’m back on my personal Bella’s Bits challenge to do 14 posts I’ve assigned myself.  This is much easier now I have a stunning new camera, Brendan!  He’s gorgeous.  Blue and Canon like and ultimately stunning.  So here’s a teeny tiny peek into my winter wardrobe, Urban Outfitters style.  I’m well aware that the shots look like bad Ebay ones selling my clothes.  I’m still getting used to Brendan, lighting etc. and my bedroom at Uni is pretty dark.  Ah well, enough excuses!

My love for Urban Outfitters began when I was about 12/13 years old, WAY before it got popular.  About once a month all through school and college my Mum and I would pop up to Oxford Circus and trail around the flagship store for goodies.  My secret is to head to the sale, I don’t think I paid full price for any of these items.  I would say that well over a third of my wardrobe is U.O..  I don’t shop there as much anymore.  I don’t know if that’s because it’s become way more popular and I have the whole ‘don’t want to see anyone else wearing my stuff’ fear or just because I’ve grown up a bit.  When I say grown up a bit, I mean I don’t have the same desire I used to to buy, buy, buy.  I’m more than happy with what I’ve got and I think (at least I hope!) I have the creativity to make new looks with my existing clothes.  Anyway..!

More shoes!  Here are my, what I call, Victorian booties.  I’ve had these for about five years now and they’ve been sewn/stitched/reheeled/relaced more times that I care to believe.  These only really come out in the Winter and I can only really wear them with tights, cause they pinch a bit now due to all the reloving.  Still gorgeous though!

This is one of my most recent U.O. purchases.  A beaut of a cardigan I wear ALOT.  It’s huge but so versatile cause it can be just a cardy or act as a giant jumper.  Love. 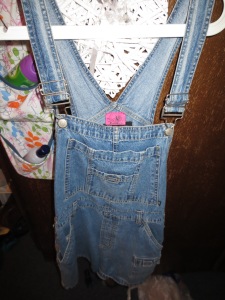 Here are some dugarees I got in the vintage section of U.O. a few years ago, before they started to reform absolutely everything by adding studs or patchworks (I’m not bitter, honest.)  They’ve done me well.  I’ve partied at festivals in these, worn them as a cover up on holiday, and even added long sleeve tees and tights for winter.  All good.

And it’s not all casual wear!  Here is one of many playsuits/jumpsuits I own from U.O. but it’s my fav as it’s probably the most versatile. It is my LBD in playsuit form.  Black, silk, plain, gorgeous with a killer lacy back.  This is the kind of thing I throw on to go out when I’m not sure what else to wear.  Looks great with Keds or Heels!

So a teeny tiny peek into my U.O. Obsession.  Bear in mind I have jeans, jewellry, bunting, flasks, pictures, posters, tees, tasches from U.O., to photograph them all would take FAR too long!  Hope you’ve enjoyed your sneak peak.  Want to see more of my wardrobe?

Right kids, well I’m off to London for four nights.  So expect a travel post when I’m back.  Take care kids!

Wow, just wow.  Massive apologies for not blogging in a while, stuff has been pretty hectic.  Nevertheless, as the title suggests I am now free, absolutely free.

My last exam went well before rushing to the pub ordering Champagne and Camembert.  Standard.  I felt delightfully tipsy as I packed my case for New York.  I remember feeling nothing, it was bizarre.  The day before, after my Chemistry exam I had sobbed the whole journey home.  Nothing to do with the exam, that was fine, I just wept.  I still don’t really know why, maybe I was just being a girl, but A Level hell was nearly over.  The next day I felt nothing.  I sat in my car, just waiting for the explosion of emotion that I expected to hit me like a ton of bricks, and none came.  It still hasn’t.  The closest was a few goose bumpy tears on the plane, coinciding with the ‘StreetDance’ movie finale (Beautiful film if you ever get the chance to watch it).  Maybe it’s natural.  My friends thought so when I asked them about it, no tears, no relief, no fear, just nothing.  Hmm, I’ll update you if anything changes.

The whole freedom thing is a bit strange though.  For almost 2 years I’ve had my strict college routine and even stricter these past few months with revision.  Now I have nothing.  I bounded out of bed this morning with my head buzzing with study cards and highlighters, to be greeted with a day of nothing.  Lovely, but odd.  The freedom from technology for a week was definitely welcome.  I couldn’t be doing with my phone in the States and I only checked the Internet a couple of times, I just didn’t feel the need.  Before New York, I maybe updated Twitter and checked Facebook three, perhaps four times a day.  Now, I’m more than content with just once.

So I’m free.  Free from exams, from college, free from my life as I’ve known it these past two years.  Summer has officially arrived with a stunning trip to New York, stay tuned for that one.  I’ve fallen blissfully in love with life all over again.

(I wrote this last night when wordpress was down.  Hence the NOW uploadage.)  So that’s it.  I’m officially halfway!  3 down, 3 to go.  Such an incredible feeling.  Between flitting in and out of college for revision sessions I’ve had a Tesco clothes shopping spree, seen my girls, hung out at the pub and had boozy bbqs galore.  It’s going good.  With an entire subject completed and out the way I revise nonstop, just less of the subjects.  Silly Annabel just thought the revision would let up, apparently not. It’s okay though, the subjects are relatively enjoyable and my ridiculous rainbow of revision notes keeps me going throughout the day.

I’ve also come to rely upon cottage cheese on crackers (thanks Rosie) and copius amounts of salami, combined with standard coffee, jelly beans and poppadoms.  Yes, so whilst my revision diet has been growing profusely, so has my stomach.  Refer to previous post ‘Empowered’ but I’m definitely going to try and eat healthier.  Today I went on a run, an actual run.  It was beyond excruciating but now I feel lovely!    So hope you’ve enjoyed my miniature blog about what I’ve been up to, I’m off to blow my burnt calories on the World Cup and beer.  Laters!

This blog has now closed.